We are working to safely fill your orders. Shipping time may be delayed due to the pandemic. CLICK HERE FOR DETAILS

What is a switch adapted toy/device and who would use it?

If a person has an inability to use their hands to push buttons or manipulate toys, then those items need to be adapted so a switch can be plugged into them. A switch is a button, lever or device that senses movement. These allow people with disabilities larger buttons to push, or in some cases even sensitive levers or sensors that recognize very small movements. Some users activate these switches with their hands, some with their heads, knees, feet, or other body parts that they can consistently move.

Switches come in a variety of styles, sizes, and colors. We happen to carry several styles of switches. Usually the choice of switch is dependent on the user and the circumstance of the use. Brightly colored switches are best for individuals with limited attention, CVI, or visual impairments. For users with poor motor skills who can’t accurately locate a smaller target area, try a switch with a larger surface area such as the Big Mack. If fine motor skills are intact, you can look at a switch with a smaller surface area. Our Switch It Up! is perfect for switch users with adequate ability to locate a 3” surface and apply a moderate amount of pressure. For individuals with extremely limited movement (such as SMA, ALS) try a micro switch such as our Micro Switch or Micro Light. Some switch users can’t use their hands. So, other switch placements must be explored. There are chin switches, pillow switches (which are great for head activations, especially while in bed), and many other switch types. If you have a special situation and can’t decide which switch would be best, contact us for assistance. Below are some examples of switches.

The few that aren't adapted will be listed as such on our site. Some toys only play while the switch is being activated, while others will allow the user to press and release their switch to activate the toy for a short duration before it stops on its own. Since each toy is different, we try to give information in the description of the toy and also provide videos of most toys. In the videos, you will see the switch either being pressed and held, or pressed and released to make the toy "go".

Interfaces that go between a switch and a toy/device allow a user press and release their switch to keep the toy "going" once they release their switch. This is called latching. Or, you can set it to timer mode where once the user presses and releases their switch, the toy will continue to activate for a preset period of time (as set by the interface). For battery operated toys, this interface is a Switch, Latch, Timer (SLAT). For items that plug in, the interface would be the Powerlink. These interfaces do not work with toys that go for a short duration on their own (i.e., recite a song or story, or otherwise 'go' even after the switch has been released) and they do not work with items such as CD players.

Some off the shelf battery operated toys or devices can be adapted to accept a switch by using a battery interrupter, as shown below.

Battery interrupters allow the adaption of a battery operated toy to be easily adapted to use a switch. Simply insert our battery interrupter between "AA", "AAA", "C", or "D" batteries and make most items switch activated. This is a great option if you have a favorite toy or vocational-related device that needs to be adapted. They work with devices that have an on/off switch. and do not required the pressing of a button, squeezing or remote controlled. Choose the size based on the battery size your device uses. 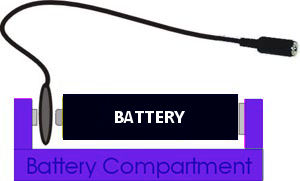 Typically you will see wiring devices with either a female or a male end on the wire. The male end is usually called a Plug and the female end is usually called a Jack. I like to think or the old fashioned telephone operator sitting in front of a large panel of Phone Jacks and when she is switching a call she inserts the Plug into the Jack on the panel. The primary sizes of connections seen in our industry are 3.5 Millimeter, also called a 1/8 inch, and the larger ¼ inch (sometimes called an RCA plug or jack). If you have a switch or device with the older ¼” RCA jack or plug, we sell adapters to bring them from the large size down to the 1/8” smaller size that is typically used today.

The rule of thumb is that toys/devices usually have a female connection on them, either on the end of a wire or built into the toy or device as a jack (typically called a surface or chassis jack) and switches have the male end on them for mating to the toy/device being switched. This allows the switch to plug into the toy or device.